Is all Baking Soda the Same?

Why does the Bob's Red Mill bag have 'Aluminum Free' on its label? Does that mean other brands have aluminum? And why does Bob's Red Mill Baking Soda cost four times more than Arm & Hammer? 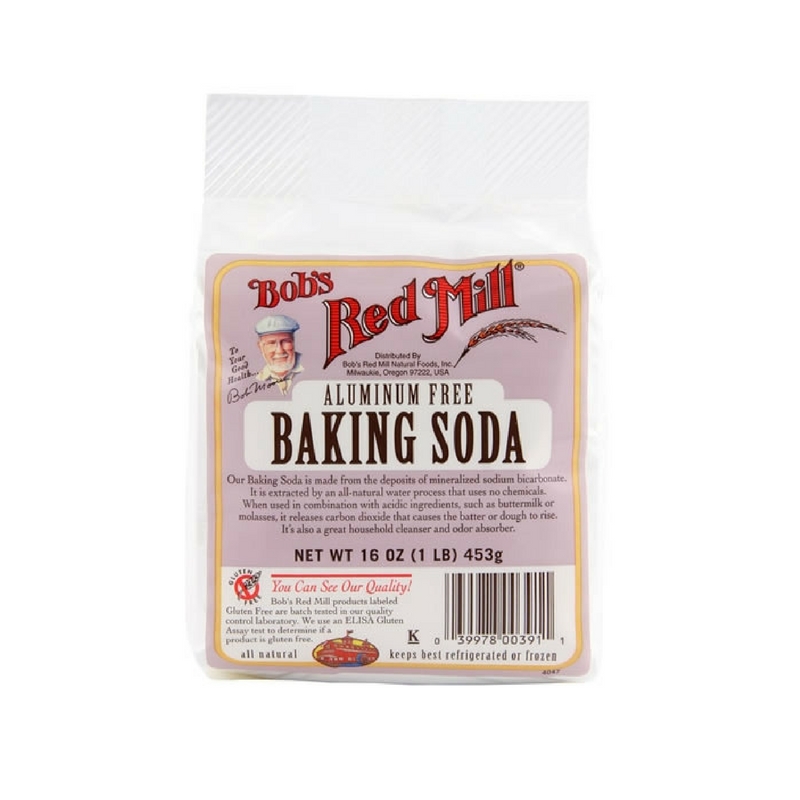 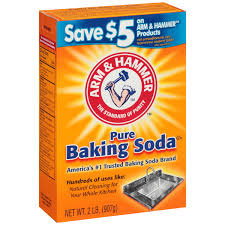 First things first: NO BRAND of baking soda has, or ever has had, aluminum in it. I did find some bloggers claiming that at one point, some brands of baking soda historically DID contain aluminum, but I found absolutely no information or evidence to back that up. I think the confusion stems from two things:

1) Baking POWDER can in fact contain aluminum (more on that later), and baking soda sounds a lot like baking powder. This happens quite a bit with consumers, especially with the advent of social media - a harmless ingredient has a name that sounds similar to another ingredient perceived as harmful, and the harmless ingredient is unfairly vilified;

2) If I wanted you to pay more for my baking soda, I might put 'aluminum-free' on the label, capitalizing on the aforementioned confusion, thereby creating the impression that other brands in fact have aluminum (I believe Bob's has since changed its packaging; the label now simply reads 'Pure Baking Soda').*

When you see deodorant manufacturers labeling their products as 'aluminum-free', that has nothing to do with baking soda. It means that the deodorant is free of aluminum-based salts like aluminum chlorohydrate used in conventional deodorants that temporarily plug the sweat ducts and prevent you from perspiring.

There's really a Bob. This is him.

*Don't get me wrong - I'm not picking on Bob's here. I love Bob's Red Mill, and I buy their products. I respect what the company stands for, how they treat their employees, that they're employee-owned, and that there's really still a guy named Bob running the show. I just think the 'aluminum-free' label wasn't cool.

The Chagrin Valley Soap and Salve Company says they received an email from a customer that stated, while she loves the products, "I will not buy your deodorant because it does not say that the baking soda is aluminum-free.” Under that logic, the customer should also be upset the label does not indicate that the baking soda used in the deodorant is lead-free, arsenic-free, e.coli-free, ebola-free, salmonella-free (you get the point). Not listing that the product doesn't have a certain ingredient or contaminant in it doesn't necessarily mean it DOES.

Are All Baking Sodas Made the Same Way? Is Bob's 'All-Natural' While Arm & Hammer is Synthetic?

Here's where there are some actual differences between brands. The following is a pretty accurate summary of what I've read from 'natural living' bloggers: Bob's Red Mill (or other health food store type brands) baking soda is mined in its 'pure, natural' state directly from the ground, and Arm & Hammer (and the grocery store brands) use a chemical-y synthetic process to make theirs. However, like much of what you'll read on these blogs, there's a little bit of truth here but also a whole lot of oversimplification and misunderstanding.

Bob's Red Mill gets it baking soda from a Colorado company called Natural Soda, the second largest baking soda producer in North America (the first is Church & Dwight, manufacturer of Arm & Hammer). If you rely on just what you read on the blogs, you'd get the impression that there are a bunch of hippies digging with shovels, uncovering baking soda and bagging it up for sale at the farmer's market.

What actually happens is a bit more complicated. According to their website,

"Natural Soda recovers sodium bicarbonate using a process known as solution mining. This involves pumping hot water approximately 1900 feet underground to dissolve the underlying nahcolite* beds and return the bicarb saturated water to the surface. The saturated brine is pumped back to the processing facility where the sodium bicarbonate is extracted. Sodium bicarbonate is crystallized by reducing the temperature of the liquor, and the crystals are collected for further processing. Excess water is then removed by high speed centrifuging (spin drying). The resultant damp crystal mass is further dried, screened, and packed."

*What's nahcolite, you ask? Baking soda is a chemical salt that occurs in its natural form as the mineral nahcolite. Nahcolite is named after its elemental components: sodium (Na), hydrogen (H), carbon (C), and oxygen (CO), with 'lite' added at the end meaning 'stone'!

Here's a couple diagrams from company's website of the entire process; the company says that it's an environmentally friendly process that involves no chemical alteration. 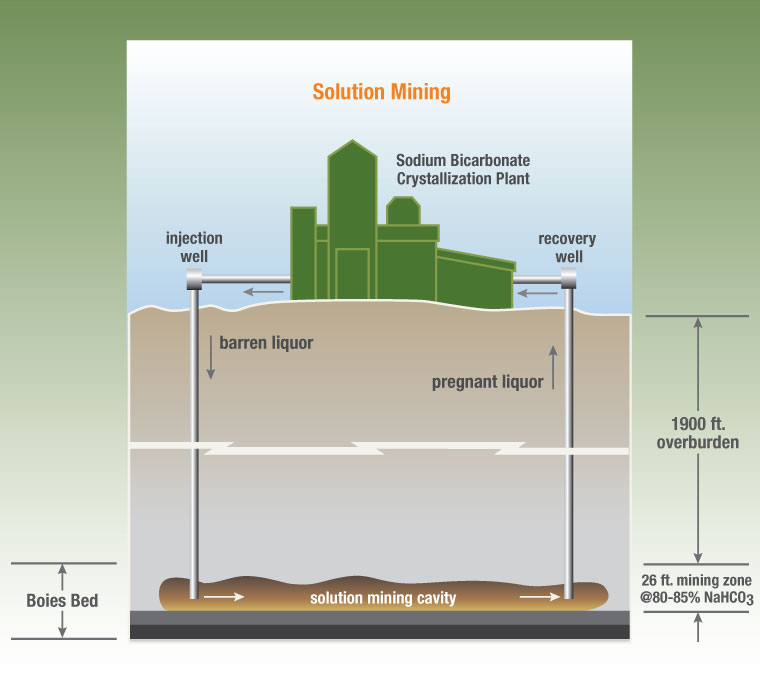 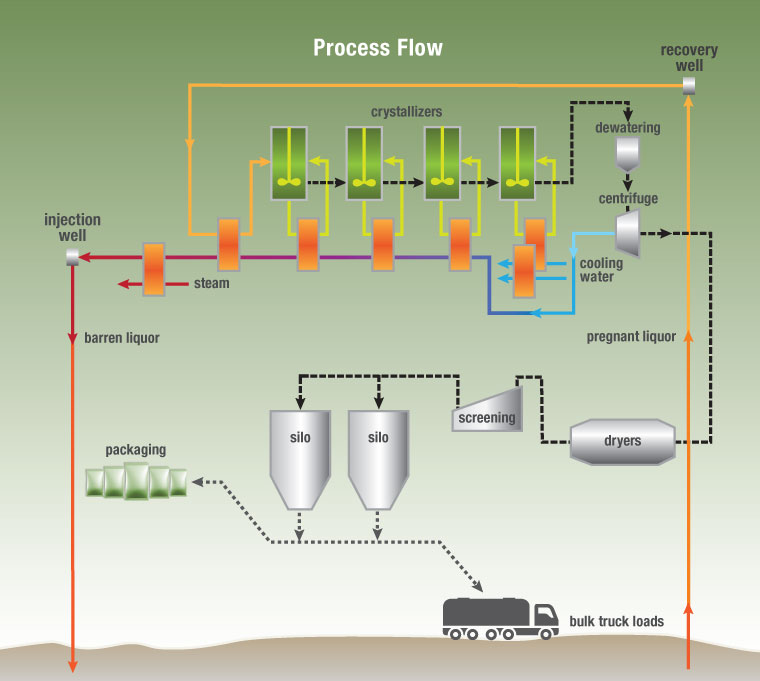 According to documents from Church and Dwight (manufacturer of Arm & Hammer), "The sodium bicarbonate manufacturing process begins with the dissolution of sodium carbonate (commonly called soda ash, or washing soda) in purified water. Carbon dioxide is bubbled through the soda ash solution and baking soda is formed. The baking soda is recovered as a wet cake. Water is removed from the sodium bicarbonate mechanically in a centrifuge and finally by drying."

I'm wondering if the bloggers mistakenly thought the soda ash used to produce the baking soda is still synthetically produced via the Solvay method.  The Solvay process is way of synthetically producing soda ash from ammonia, carbon dioxide, water, and concentrated brine solution. But the last synthetic soda ash plant in the United States closed in 1986. The rising cost of energy, pollution, and competition from natural soda ash were the factors that forced the closure of all the U.S. synthetic soda ash plants. The Solvay process is still the main way the rest of the world produces soda ash, but in the U.S., it was rendered obsolete after the discovery of massive natural soda ash deposits (trona) in Wyoming. Trona dates back 50 million years, to when the land surrounding Green River, Wyoming, was covered by a 600-square-mile (1,554-square-kilometer) lake. As it evaporated over time, this lake left a 200-billion-ton deposit of pure trona between layers of sandstone and shale. The deposit at the Green River Basin is large enough to meet the entire world's needs for soda ash and sodium bicarbonate more than 2,300 years. This is where the soda ash used to make Arm & Hammer's baking soda comes from.

Maybe the bloggers are concerned about the mining process? You can learn more about the mining of trona from the Wyoming Mining Association. There's no doubt that mining has environmental impact, but this must be put in perspective.  Lots of products come from mining, including metals, gemstones, limestone, chalk, dimension stone, table salt potash, gravel, and clay.  The environmental impact of mining includes erosion in the environment, formation of sinkholes, loss of biodiversity, and contamination of soil, groundwater, and surface water by chemicals from mining processes. Mining may produce noise pollution and dust pollution. Both Arm & Hammer and Bob's Red Mill involve mining in their supply chains.

It is, however, possible to have a double acting baking powder that has only one acid component. Monocalcium phosphate, when used in the right proportion with baking soda, reacts during the batter-mixing process and then again when heated. This is the double acting baking powder that can be labeled as “aluminum-free.” Some people claim that they can detect a metallic taste in baked goods made with conventional baking powder, and some worry about a connection between aluminum and Alzheimer’s disease.

Why do some baking powders claim to be 'GMO-free' on the labels? Baking powders contain a a starch. Besides absorbing moisture, starch makes pouring easier and provides more volume for easier measurement. The starch can be derived from potatoes or corn, and if it is from corn, it is possible that the corn is genetically modified. Baking soda cannot be made with GMOS; it is composed only one thing, sodium bicarbonate, so it really isn't necessary to label it 'Non-GMO'.

Surprisingly enough, the history of baking powder is actually full of intrigue and drama. If you're interested, you can read more about that from the Smithsonian here.

There's no aluminum in any brand of baking soda, and there never has been. The public confusion surrounding this issue resulted from 1) Baking soda sounds a lot like baking powder, and baking powder can in fact have aluminum in it; and 2) Bob's Red Mill once labeled its baking soda 'aluminum-free', misleading consumers to believe that other brands DID contain aluminum.

Personally, I don't see Arm & Hammer's process as significantly different than Bob's. I also don't think natural origin makes a product necessarily safer than a comparable synthetic process (for example, in the United States, iron oxides used as colorants in cosmetics MUST be synthetic, because  natural iron oxides can be contaminated with toxic heavy metals).  There are no impurities in either baking soda product, and both are very safe. Although Bob's Baking Soda is a fine product, I don't see any health reasons to purchase Bob's over Arm & Hammer.  If I'm going to purchase Bob's over Arm & Hammer, it'll be because I want to support an employee-owned business with sustainable business practices, not because its baking soda is better.

Battery Recycling: Should You Throw Them Out?

LANDFILLED! Even When Clean and in Your Curbside Bin. Here's Why.